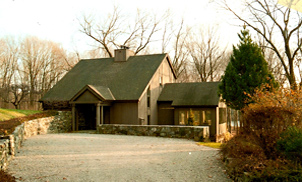 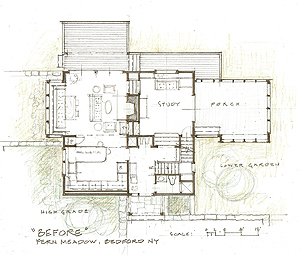 The “Before” plan shows the original ground floor Plan. A couple of years went by and some Bedford friends bought the house and asked me to add a second bedroom and bath – perhaps at the lower level under the screened porch. That was accomplished and then after a few years they sold the house to another local Bedford couple who asked me to enclose the screened porch and make it into an all year round sun room. It didn’t end there!

The third owners retired and moved to California and another New York couple bought the house.  And I had another challenge to remodel a house I had designed a decade earlier.

The property was a very special site several acres overlooking a pond at the end of an old dead end lane - right in the heart of Bedford. As the site was so extraordinary, I convinced the original clients to install a septic system sized for a five bedroom house.  That decision meant that the newest owners could add three more bed rooms without any problems with the health department and the wetlands commission.  The house was originally tucked into the hillside at the north part of the property with the focus on the east, south toward the pond, and west from the porch with late afternoon sunlight filtering through the trees.  The buffer between the house and the pond has an unusual carpet of ferns sheltered from the hot summer sun by a canopy of hardwood trees.  All in all a very special spot only an hour from the City. 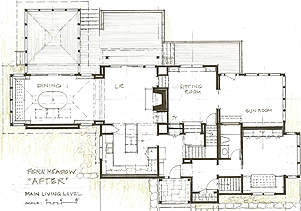 The fourth owners had small children and wanted a much bigger house. I wasn’t sure I really wanted to have another go at it, but on the other hand I didn’t want to se any other architect getting involved.


Note the Before & After floor plans of the main living level, the Before View of the house from the north side. 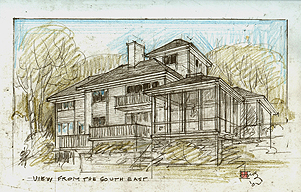 The quick sketch rendering was an early drawing to show the projected expansion of the house from the southeast. 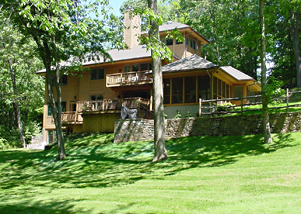 The final picture shows the completed project from approximately the same position on the lower lawn.

It was quite a journey from the late 1980s into the next millennium! 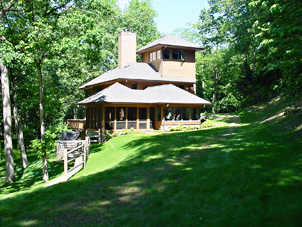 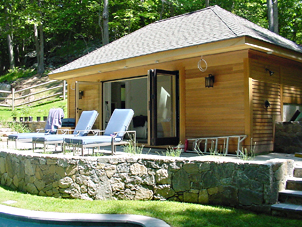